I heard the song “Papa Loves Momma” the other day and the verse “it was bound to happen, and when night it did…” kept going over in my mind after this mornings episode. I was just nicely getting going. Had set up yet another trial of a slow release product added to our fertilizer and was just documenting it in my book so I knew what side of the flag was what 4-5 months from now when the tractor started laboring and spinning. I looked up wasn’t a big deal just going through a little ditch that was probably wet a bit but the tractor would be on hard dry ground in no time. Looked back and the air cart wheel sunk away to the axle. I didn’t dare stop now just prayed it would “pop” back up. We’ll believe me it didn’t pop up but came up and then I though about my liquid caddy. It was quite full and had to come through there. The tractor now on hard dry ground is still snorting and spinning and getting worse. I figured the caddy was sunk so I clutched and stopped. 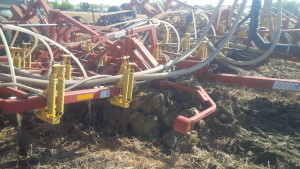 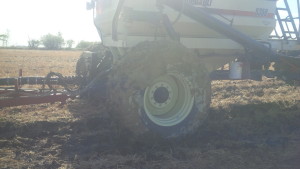 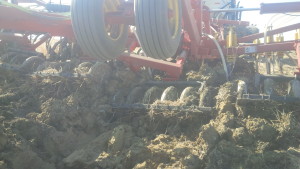 It was sunk but the air drill front castor was gone in the gumbo muck and the Packers full as well. It had fallen into the air cart holes and was not coming up. What do I do when I panic? I radio Lane, no answer. Call his cell, no answer. Luckily Marie was ‎home today and she answered my call of distress. Soon Lane was on the radio and headed home instead of spraying. They brought blocks, shovels and chains. Lane and I shoveled muck that would not fall off your spade while Marie dug with her hands around the Packers. We decided to bring the liquid trailer across the field and pumped out the caddy and still unhook it from the air drill. We put blocks under wheels and then slowly drove ahead. It came out rather easy which was a relief. Then pull out caddy separately and rehook it up. Then pump liquid back on. The whole ordeal took about 2 hrs which means it’s gonna be a late night for yours truly. That’s what you get for not taking it off Autosteer and steer around the ditch rather than running with a wheel right down the middle. Lesson learned and nothing got broke so that was good. But I’m more cautious now.

Why those ‎lyrics are associated with getting stuck is because I have seeded nearly 12,000 acres (3yrs) with this drill and tractor and have yet to be stuck, until today, so “it was bound to happen and today it did…” 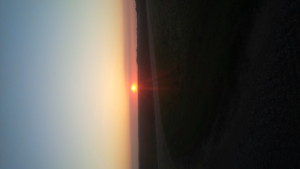