This week ended up being a pretty nice week weatherwise. I kept putting things closer to the shop so that they would be accessible to the shop without getting muddy if the rain came, but it didn’t, until Saturday morning. As luck would have it Lane and family headed to the farm to help prep equipment and get ready for spring. Rain started around 11 and did not let up until we got nearly an inch. It could have been a lot worse. Not far north lots of pictures of people with inches of wet heavy snow.

This gave us some time to get the sprayer ready, as it was in the shop and generally just have some discussions about our plan for #plant15 (twitter hastag).  The rain meant we now have water again in our shop, as we have a tank set up that collects rainwater and so we got the pressure system primed up and the hot water heater going so we can now come in for dinner with clean (warm) hands. The pump was a bit stiff so needed some TLC to get it running again. I guess we shouldn’t leave it unused for 7 months.

We are getting closer to having everything ready. Most of the equipment is now ready and the liquid fertilizer has all been stirred up to get the crystals out of it that form with long term storage. 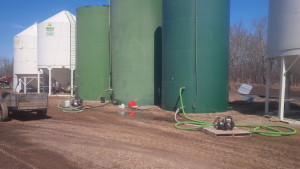 We had a casualty this week, it was one of the pumps decided to fail. It was a Briggs & Stratton engine that neither of us liked ever since we bought it and as we suspected it didn’t last that long.

Another project that big boys do on rainy days is add “bling” to their trucks. Before Lane left for Regina we installed a new LED light bar on the semi. This will be very useful during those late night harvest runs and early morning hauls in the winter. Looking forward to trying it out. 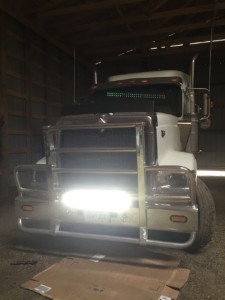 The forecast looks great for the week. With any luck hopefully be putting some seeds in the ground by next weekend with #plant15 underway.

Its a fascinating read about who owns the farm equipment we drive up and down the field. And its not the bank you’re worried about this time. 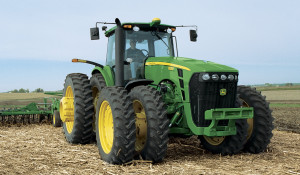 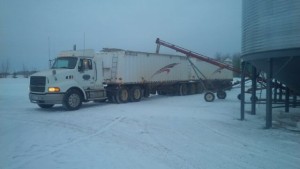 Earlier morning than I have been used to this morning. Hauling out some malt barley this morning to our local malt gathering station at Englefeld. About 4 in of wet snow was not what we needed as it makes everything slippery and sloppy. That’s why you’ll notice I’m using our day cab truck we use for hauling liquid fertilizer in the spring and short hauls of grain from the field to the bin. I didn’t want to get the big truck all slopped up after having just finished polishing all the aluminum on it to a mirror finish. What can I say, I’m a suckered for shiny things.

After a day of snow the sun is out today, it is +7 degrees and the water is running again. The wet snow yesterday is making the yard very sloppy so what do big kids do. Go play in the water. I bladed off what snow was left and tried to level any ruts made this morning.

Some of the barley hauled in today is being cleaned for seed so need to go pick it up tomorrow and dump into a cleaned out bin. Got the auger all set up today so should be ready for tomorrow provided it is cold over night and freezes the ground.

Waking to 2″ of snow was not exactly what we had in mind for an early Spring that would hopefully dry up the fields and roads as we prep for seeding 2015!

In due time, we’ll be ready to roll, but these snow delays are slowing us down and making this feel more and more like a regular Spring (wet and a little bit more wet).