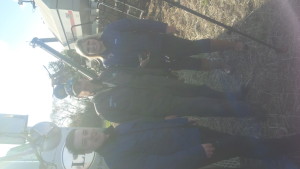 Last Thursday, David and Janelle from Farm Credit Canada came out to the farm to get some film and pictures of our operation ‎during seeding. They want to make an educational video to be used internally to show all their staff the hands on tasks of planting a crop. David and Janelle got the first taste of seeding with an early morning departure from Regina. They arrived at 7:30 so that means they left before 5:30 because they also had with them some Tim Horton treats for us.

It worked out great because we were just moving to “Moores” and starting some barley so I was setting the drill and calibrating it which they were able to capture on video. As I was going through my setting routine and unexpected visit from Matt Beal occurred. He was “in the area” so thought he would stop by and see the operation in action. It was great to see him and make a round in the tractor that he found for us. We met Matt through his wife who works at FCC with Lane. He is a great resource for us to ask questions. You see he is a mechanic and what farm can’t use a mechanic on their speed dial. He worked at Markusson in Regina until last summer when he decided to take a promotion and became a territory service manager for Claas, still yellow just a different shade. He has for the past 4 or so years been coming out to the farm and helping us get our combines in tip top shape each year before harvest. We always look forward to spending a day in the shop with Matt, and hope he does too!

Back to the video, David and Janelle were very accommodating and did not get in my way at all. I tried to explain things as I went and so not sure what they caught on tape . We all snuggled into the cab and did some footage “in action” so see how that turns out. Janelle got the worst seat having to sit on the tool box so was a little stiff I suspect when it came time to get out. Shortly after dinner they had enough and we’re ready to depart but there was no way I was letting able bodied help leave without giving me a hand filling the air tank. David graciously agreed and even pulled out a brand spanking new pair of gloves. For a farmer the site of new gloves is like putting a bowl of ice cream in front of them and tell them they can’t touch it. I suspect maybe someone tipped him off that if you are going to see Lance be prepared to be put to work. You see last time that FCC was out with a film crew it came to my attention that one of the assistants had his 1A licence so by the end of the day I had him taking one of the semi’s home for me. So maybe David was warned and therefore took the advice and came prepared. 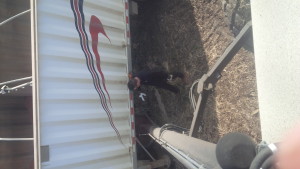 They left and I grabbed the Tim Bit box and went back to my day of putting in 300 acres of 2 row barley hopefully to make Malt quality so we can all enjoy a cold beer on a hot summer day!